What are Shards? What are Anomalies? Why do I care?

The Resistance and Enlightened factions battle worldwide during anomalies. The anomalies not only provide a sense of collective pride and team cohesion, but also (theoretically anyway) affect the Ingress storyline. They’re also a great way to get out and have fun, meet new players and explore new places with friends (carpooling can be fun!). Ever wanted to establish relationships with agents in new states and new areas? Travel to an anomaly site and get social! This is where many contacts are made on both sides that can result in lasting friendships, and hopefully, lots of frogtears when you plan operations together!

But first, how are they scored?

The combined total of these (the scoring of them, and their influence in the series varies by series) work out to the total faction score for the anomalies.

How do you find out the rules?

Much like everything else in Ingress, it’s left for you to discover. Hints are everywhere. Sometime’s it’s hackable media (or media using encoded passcodes hidden in Niantic videos (watch the ingress report very carefully, you’ll see numbers flash and stuff, those are coded passcodes, sometimes they just hold gear, sometimes they hold media that contain hints of future events!)).

Other places to look:

Ingress has several corporations in game that perform research on XM, and play a part in the storyline:

Some of these players are “deceased” within the game. Calvin ball is a thing, and it’s worth circling them all to watch for intel just in case. Many of the most active characters here were once thought dead at one time and a deus ex machina is pretty much a given.

One more name you should know: Verity Seke. This account acts as overwatch on the discussion thread of the non player character G+ accounts, and if you make constructive comments, Verity will occasionally post one use passcodes to you via private G+ posts for gear. 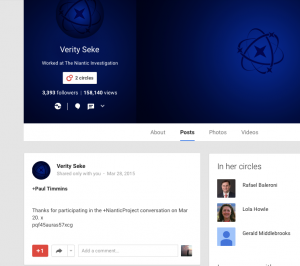 These are rewards for you, and are single use redeem. Often invisible blank characters are stuck on the end of these. If it says “Invalid Passcode” try backspacing at the end, or at worse retyping it.